The battle of the subcompact guns has been going on for a long time, but Glock was late to get in the game. Glock has made several great sub-compact models but the two most popular have been the G43 and the G43x. One of the questions we get very often is which of these Glocks we suggest, and honestly, we suggest both. What we are going to talk about are the benefits of both models and why you would choose one over the other.

For a long time, we were waiting on a small concealable 9mm option from Glock. The G26 is a great gun but it is too thick to compete with the subcompact models that other companies had to offer. The G43 was the answer to this gap in Glocks inventory. The G43 is truly sub-compact with a 6 round single stack magazine, and a very short grip. This makes the G43 one of the most concealable models Glock has ever produced, so small that many people carry the G43 in a pocket holster. The small size of the G43 comes with benefits and costs though. One of the biggest concerns with the G43 is ammo capacity, 6+1 leaves a lot to be desired. Another concern with the G43 is recoil control. The very small grip can make controlling recoil hard.

One of the new innovations with Glock handguns are crossover pistols. The first crossover pistol that Glock released was the G19x. This model uses a G19 slide on a G17 frame for a balanced pistol that quickly became a favorite of Glock shooters. This same idea brought about the G43x. the G43x uses a G43 slide on a G48 frame, which is slightly wider than the G43 frame and the same length as a G19 frame. This creates a much easier to shoot handgun that is still very concealable. The change in the grip for the G43x also increased its magazine capacity to 10+1 and Shield Arms was quick to come out with an aftermarket magazine that holds 15+1. Along with the improved grip the G43x also comes from Glock with front slide serrations which is one of the more popular aftermarket machining options on a G43.

So, which sub-compact 9mm Glock is right for you? The G43 and 43x are very similar handguns, even sharing many of the same parts, but they have different strengths. The G43 is the king of concealment due to the length of its frame and the single stack width. Often, we find ourselves carrying this gun with a clip and trigger guard holster in boardshorts and a tee shirt. The G43x sits in a sweet spot between double stack and single stack width. It is still a very slim frame but a noticeably larger gun than the G43. This means that while the G43x is a very concealable gun you do have to more deliberate about how you carry it. Good holster selection is important with any gun but a good concealed holster makes the G43x very easy to carry.

Shooting these two guns side by side is where the differences really start to show. Both models are Glocks so there is not much to talk about in terms of reliability, other than to say that they work under almost any circumstances. More important though is the shooting experience between the G43 and the G43x. The G43 shoots like a subcompact 9mm, meaning its snappy! The felt recoil on a G43 is intense for a 9mm and can be hard to control for new shooters. This is where the G43x has a clear advantage over the G43. Where the G43 has a very snappy recoil the G43x feels much more balanced. This can be said about all the Glock crossover models but it is especially noticeable with the G43x. The 19 length and slightly wider grip make recoil management a breeze. It feels much more like shooting a G19 than a G43.

In our minds the clear winner between these two models is the G43x. While you do sacrifice some concealability if you are using a quality holster you won’t find any issues carrying this gun. The shooting experience with the G43x though can’t be beat. You even see other companies like Sig offering larger frame subcompacts after the release of the 43x and 48. The 43x is also a more modern offering from Glock especially with the release of the MOS version of this gun. The G43x MOS adds two important features we expect to see from larger handguns. First, Glock added an accessory rail to the frame of the G43x MOS. This rail is not sized for standard pistol lights, but companies are pushing out proprietary lights for this model. One good example is the Streamlight TLR-7 Sub. Having a pistol light greatly increases your effectiveness during low light situations and in our opinion is a must for a carry gun. The second and more important feature is the Glock MOS system.

Glock’s MOS system allows the end user to mount a red dot to their slide. The ability to mount red dots to handguns has become almost an industry standard at this point, but now its available for your subcompact Glock as well. Red dots on handguns have many advantages including faster follow up shots, better accuracy, easier target transition, and most importantly they allow for better awareness and visuals whether you are shooting at the range or in a defensive situation. The 43x MOS is ready to mount the Shield Sights RMSC and will accept the Holosun 507/407K optics with an adapter plate.

If you are looking to pick up a G43x or G43 we have these in stock and ready to ship to your FFL. We also carry the OEM and Aftermarket parts that you need to take your Glock to the next level. Be sure to check out the parts that we have for your 43x. From the Shield Arms magazines and magwells to upgraded internal parts we have everything that you need! 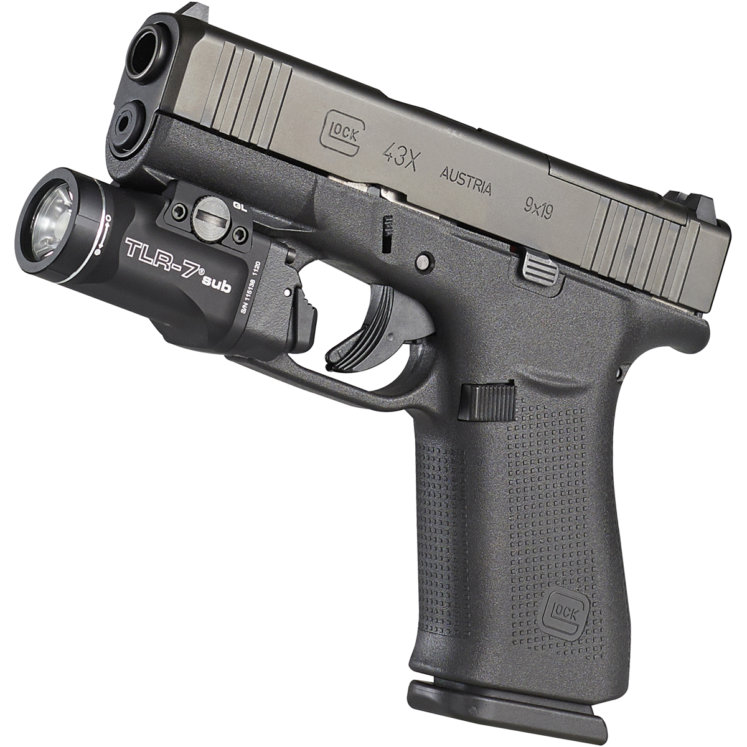